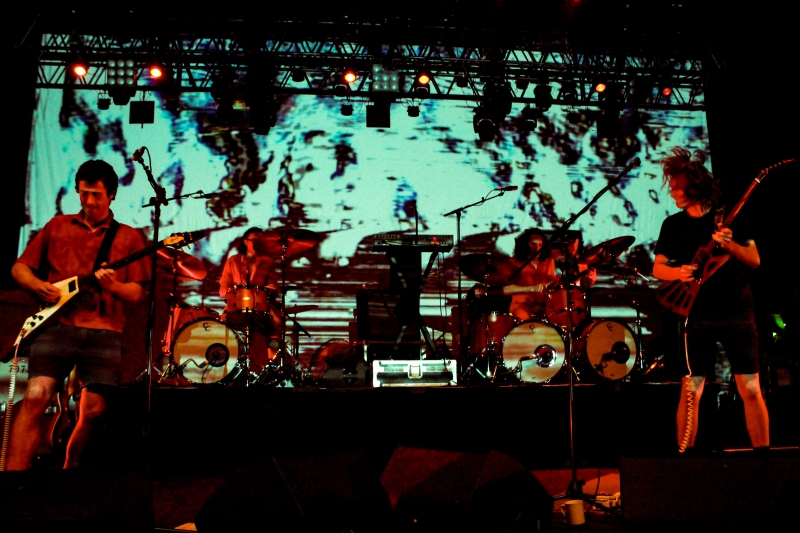 King Gizzard and the Lizard Wizard unveil another  live album featuring a handful of new tracks.

Following the release of their three live albums from past Paris, Adelaide and Brussels shows earlier this year, the Australian experimental rock group have returned with another live record. Chunky Shrapnel soundtracks their tour film, which premiered last week and documented another set of last year’s European shows.

The album starts off  with a brand new track, “Evil Star” which consists of a haunting instrumental that fits with their heavier material. The distinct sound builds up gradually, playing as the suspenseful track to the opening credits of a horror film. The track then slowly fades out to their performance of “The River,” in Luxembourg. The track list goes accordingly with the full performances and includes all of the elements from the live sets    even the screaming fans. Each of the live song captures the exact ambience from their show without compromising too much of the sound.

Chunky Shrapnel also features two other new tracks. “Quarantine,” consists of subtle sounds reminiscent of a flute and acts as a transition between “Murder of the Universe,” live from their show in Utrecht and “Planet B,” live from Alexandra Palace. “Anamnesis,” is a slower number that consists of an echoed xylophone and subtle keys. This track presents itself as the turning point within album, as it shifts the direction to be calmer before slowly building it up to become more upbeat. The album culminates with a live rendition of “A Brief History of Planet Earth,” which consists of a 19 minute medley track, compiled from various different shows and has yet to be released. This number can be viewed as a continuation of “Anamnesis.” as it contains the same subtle xylophone elements from the start before slowly building up. The track also contains various different instruments, despite shifting to be entirely guitar driven.

The Chunky Shrapnel film will be available for a second 24 hour screening later on this evening, which can be rented here.

King Gizzard and the Lizard Wizard have also postponed their upcoming North American to October. Click here to view and purchase all tickets.

Watch the trailer for Chunky Shrapnel below: